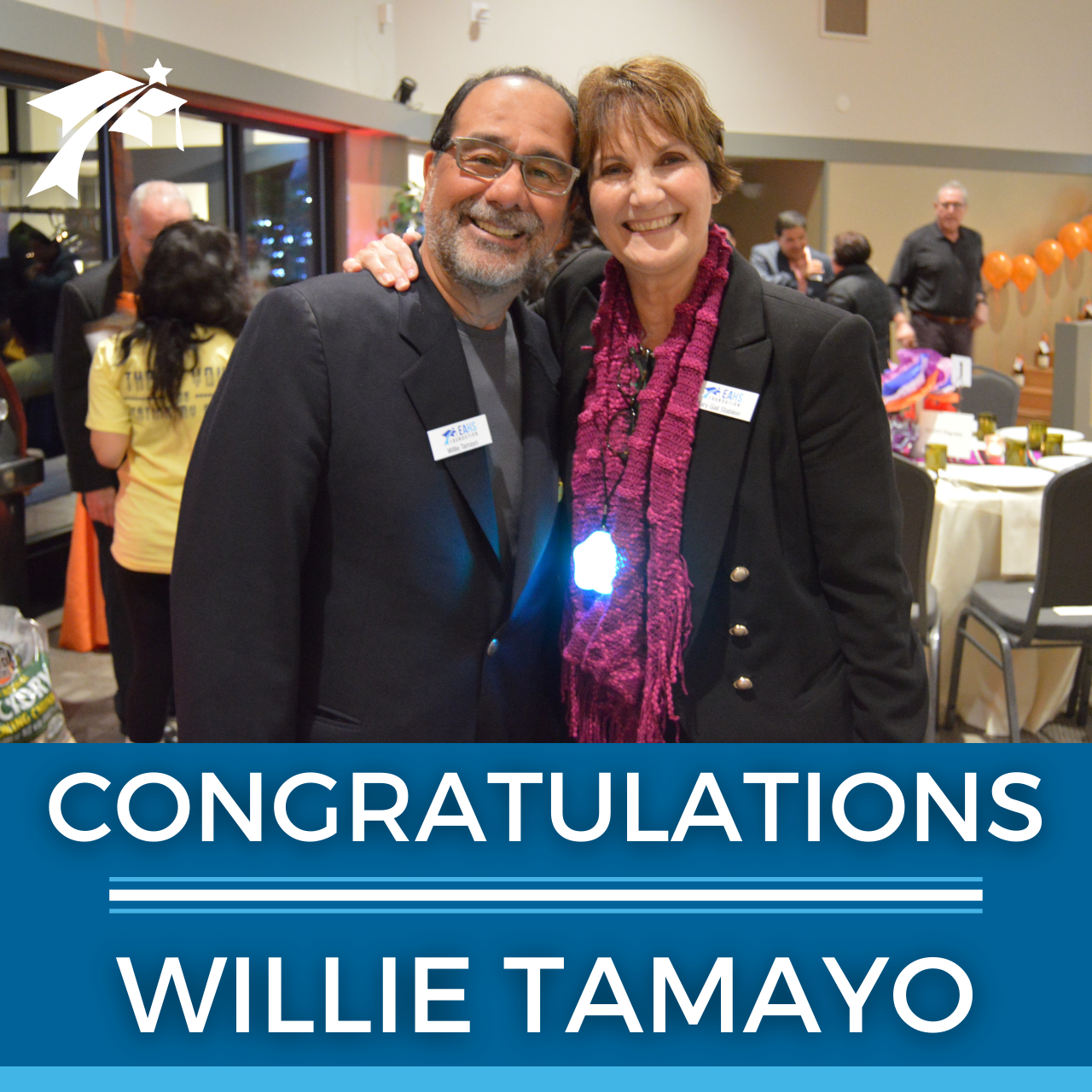 It is an honor to nominate the Elsie Allen High School Foundation founder, William “Willie” E. Tamayo for the Heart of Sonoma County Lifetime Achievement Award.

Mr. Tamayo is a lifelong supporter of charitable organizations in Sonoma County. A highly active community leader, he has contributed his time and leadership skills serving on over ten boards, including the Sutter Santa Rosa Foundation and Luther Burbank Center for the Arts. His philanthropic contributions include personal donations and fundraising for the Breast Cancer Research Center, Pacific Medical Foundation, the Salvation Army, the YMCA, and many more. Contributing to his community is a guiding principle in his life, “I think everyone who gets engaged in the community and finds a particular niche can contribute back. I don’t think there’s any greater feeling a person can have than they’ve given a little time or attention to an individual or organization that needs it. That’s one of the best feelings you can have, knowing you’ve made a little bit of a difference.”

Mr. Tamayo’s passion for education has led him to tirelessly dedicate himself to disadvantaged youth and the Latinx community in Sonoma County. A much-loved community leader, Mr. Tamayo has leveraged his background, knowledge, skills, relationships and resources to support initiatives and organizations that promote learning, skill building and confidence in underprivileged youth.

Dating back to the early 1990s, Mr. Tamayo and his family have supported Social Advocates for Youth (SAY), a local nonprofit dedicated to providing formerly homeless and foster youth with a safe space to learn independent living skills and how to manage their traumas, navigate the “real world,” and strive to fulfill their potential. Mr. Tamayo’s financial and leadership support of SAY led to the creation of Tamayo Village in 1996. Tamayo Village continues to help our most vulnerable youth by providing 1) safe and affordable housing, 2) counseling and skill-building, and 3) job and education support.

Mr. Tamayo combined his love of education, food and youngsters by contributing leadership and resources to Guy Fieri’s Cooking for Kids Foundation Advisory Board from 2009 to 2012. Mr. Tamayo was instrumental in program development and financial support, contributing to the mission to increase excitement and skills so children have fun while building their confidence and skills cooking nutritious meals and leading healthy lives.

Perhaps Mr. Tamayo’s greatest accomplishment is founding the Elsie Allen High School Foundation (but we are a little biased)! Elsie Allen High School has the highest percentage of socio-economically disadvantaged students in Sonoma County. Over two-thirds are eligible for free and reduced lunch, over 80% are students of color, one-third are English learners, and the majority are the first in their families to graduate from high school and go to college.

As the Board President for six years, Mr. Tamayo built strong relationships between the school and the community. The Elsie Allen High School Foundation raised $56,000 in its first year awarding $40,000 in scholarships to the Class of 2014. Since its founding in 2013, the EAHS Foundation and its partners have invested over $430,000 in scholarships to students who are attending vocational schools and two- and four-year colleges. The foundation’s scholarship endowment now stands at $700,000 and is slated to reach the one-million mark by the end of 2022.

Mr. Tamayo spearheaded the Compact for Success Program in the early days of the foundation, creating partnerships between Elsie Allen High School, its “feeder school,” Lawrence Cook Middle School and Sonoma State University. This program continues to increase access to higher education for low-income students by getting them on the college track through college preparatory coursework culminating in their enrollment at Sonoma State. By increasing access and reducing barriers to education and career opportunities, Mr. Tamayo has helped countless youth over the decades realize their dreams of higher education, good jobs and fulfilling careers.

As a personal role model and first-generation college graduate, Willie has inspired generations of youth to work hard, pursue their dreams and pay it forward. These values were instilled in Willie at a young age. His parents founded La Tortilla Factory in 1977. “They worked hard at making sure we understood the value of education, even though neither one of them graduated from high school.” Willie earned a business degree from UC Berkeley and returned to work in the family business growing it into one of Sonoma County’s largest and most successful businesses employing hundreds of locals (even during the pandemic). Mr. Tamayo’s community engagement and steadfast support of youth and education continue to inspire and mobilize young and old alike. Willie: “We come from very humble beginnings. My mother’s parents were migrant workers. They came to the United States, like many immigrants, looking for a better life, for themselves and their family. She would always remind us that no matter how much or a little an individual has, they should always be able to share a little bit of it with the less fortunate.”

Our community has long recognized and acknowledged Mr. Tamayo’s unwavering dedication and significant contributions to his community.

We appreciate this opportunity to nominate our hero, Willie Tamayo, for this prestigious award.

Thank you for your time and consideration.